The excerpt of a document on a special kind of salt used for preserving vegetables caused a major stir on Chinese social media. It states that in the interest of public health and to satisfy requirements from overseas customers, stringent measures must be in place to prevent special salt used for preserving vegetables from ending up as table salt in homes.

The second paragraph states that “special salt” does not contain iodine and potassium hexacynoferrate. 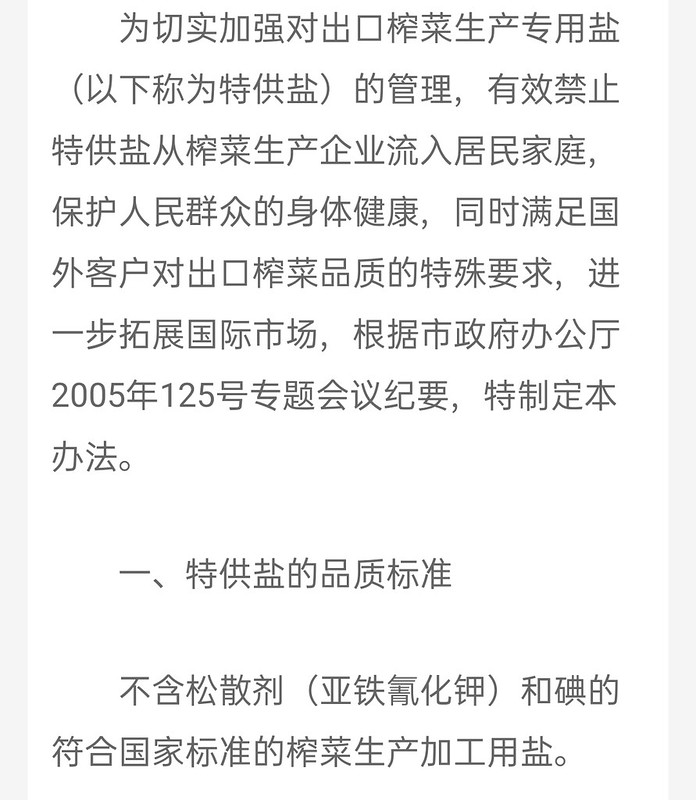 Chinese netizens were up in arms. The statement states that special salt should not contain iodine and potassium hexacynoferrate. Does it imply that the salt used in households contain the two substances? Well, it’s no secret, as clearly stated in the labels. The same anti-caking agent can be found in salts produced all over the world. Sodium or potassium hexacynoferrates are non-toxic and approved as food additives.

Why is it that “special salt” should not contain hexacynoferrate? That’s because sacks of salt are emptied into drums containing vegetables to be preserved. There is no need for any anti-caking agent which only comes in handy when you want to dispense salt from a shaker.

The “special salt” also does not contain iodine, probably because of cost factors. Thus, this non-fortified salt should not be consumed as table salt as iodine deficiency could be a problem if it’s used as a table salt.