If there is one thing common between Singaporeans and Hong Kongers, that has to be their pragmatism. But there is an important difference. Singaporeans are pragmatic in allowing a single party to dominate politics as long as they could keep the economy humming.

Hong Kongers are a lot less dependent on their government. They attribute their success to the freedom and non-interference by the government that they enjoy. When the Umbrella Movement first erupted, many “experts” here predicted that it would not last. Their reason? Hong Kongers are pragmatic people. When the anti-Extradition protests reached mammoth proportions, many of these “experts” were left scratching their heads.

“How much did the Americans pay you?”

“It must be sponsored by the CIA, jealous of China’s success and desperate to mess things up for Beijing.”

Blue ribbon in China’s pocket, so Yellow ribbon must be in America’s pocket? Hell no. Joshua Wong’s journal (written in prison in 2017) shares some of his thoughts with the public. Those who understand him will understand him better. Those who misunderstand him will probably still fail to understand how a youngster with a bright future would throw it all away by challenging the autocrats running their empire from the north. Brainwashed by state media, they assume that the evil and envious Americans must be behind all this.

Many people are quite simplistic about the movement and assume that they all bear the same flag. As Joshua pointed out, there are diverse groups with equally diverse agendas in the movement. They had temporarily put their differences aside to fight for One Country Two Systems and the universal suffrage promised by the Beijing government which was supposed to be due in 2017. Joshua emphasized that he was against independence movement – just like the majority of the protesters, but it should not be forgotten that there are “cults” within the movement with a multitude of agendas, some moderate and some downright radical. However, the overwhelming majority just want freedom, democracy and the transparency of the judiciary. 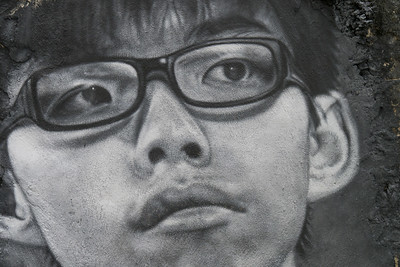 One issue often brought out by people against the struggle of the yellow ribbons was the escalating violence of the protesters. While this violence may be undesirable, it should be understood that it is not in the nature of the young protesters to destroy things. These characters are totally out of place in a prison filled with frauds and gangsters. While it may be easy for us to sit behind our keyboards and condemn the violence, it shouldn’t be too difficult to follow the management style that has led to this transition from peaceful protests to Molotov cocktails.

“By shutting the opposition out of the legislature and locking people up when they took to the streets, the Hong Kong government was forcing its opponents to pursue more radical options. No one else but our political leaders who act at the behest of the Chinese communist party, is responsible for pushing citizens towards more violent forms of resistance, destabilizing the city in the process. As activists, our challenge is to strike the delicate balance between principles and results. What else can we do when our right to political participation is denied to us and non-violent protest are repeatedly ignored. How much violence any can be tolerated to further our cause without alienating Hong Kong society and the international community?”

“When mass protests began to flare up in June, it felt as if it was the Umbrella Movement all over again, except this time, protesters were angrier and more combative than their predecessors, young people’s voices went from loud to deafening as they refused to be brushed aside in the way they have been in 2014. Street demonstrations escalated quickly after two back-to-back million-person marches failed to move the political needle. Both Hong Kong and Chinese governments refuse to scrap the Extradition Bill despite the record-breaking turnout. Peaceful rallies soon gave way to full-scale urban guerrilla warfare.

“A more militant protester emerged. Dressed in black and wearing yellow hard hats and half face respirator masks and the movement grew in size and organization. Faceless and leaderless, it self-mobilized using crowd sourcing apps and began clashing with police and vandalizing properties of business perceived to be pro-establishment. Some dug up bricks from the pavement and hurled them at the police, while others threw Molotov cocktails and set subway exits on fire. A piece of anti-government graffiti offered a poignant explanation, if not a justification for the use of more aggressive tactics. “It was YOU who taught us that peaceful protest doesn’t work.”

Indeed, the 50-year countdown mentioned in Joshua’s book is really a farce. The regime began tightening its grip on Hong Kong one second after 30 June 1997. Joshua wrote about how mainlanders helped revive Hong Kong’s economy after SARS in 2003. Returning the favour, Hong Kongers donated millions of dollars worth of aid to China after the 2008 earthquake. Most Hong Kongers are happy to be Chinese nationals. They just want a different system of government – one that they are familiar with – with universal suffrage and and independent judiciary thrown in to sustain and protect those rights. Joshua observed that today’s Hong Kong’s bookstores’ bestsellers are the same as that before 1997 – migration and operating businesses overseas.

Joshua’s observation of China’s transformation over the last 4 decades is spot on. Since Deng Xiaoping’s days, Chinese citizens and optimists in the free world had assumed that economic prosperity would bring about freedom and ruling class accountability. From Deng to Jiang to Hu, the basic formula of economy over nationalism had worked well for most people. With Xi Jinping at the helm, things have taken a drastic turn with hope of Hong Kong ever gaining genuine autonomy completely dashed. It is not that China’s trading partners hadn’t noticed, but they too have now prioritised profit over principles.