A Hong Kong school has apologised after a teacher gave incorrect information to pupils during an online lesson on the first opium war, the 19th century conflict which resulted in China ceding Hong Kong Island to Britain.

The Education Bureau said the teacher’s retelling of the hostilities was “obviously untrue and unacceptable”, adding it would investigate the incident.

A video circulating on social media platforms this week showed a teacher, believed to be from Ho Lap Primary School in Tsz Wan Shan, telling a class that the conflict – which erupted in 1840 – was the result of Britain’s attempt to ban opium smoking in China. 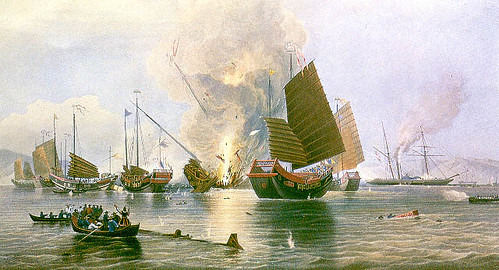 In the three-minute video, the teacher said: “Britain wanted to attack China in an attempt to ban smoking … Because Britain had found back then many people in China were smoking and the problem was really serious.

“Therefore, they [Britain] initiated the opium war so as to destroy these items called opium.”

Fake history? So what’s real? The Opium War happened some 180 years ago and there is only one country that still keeps talking about it. There is hence only one official narrative that is being repeated over and over again. Condemnation for the Hong Kong teacher has been fast and furious. One particularly serious accusation I’ve come across was 认贼作父 or taking a thief/villain for a father. Coming from a Singaporean, I’m not sure if he was just echoing the views of his cronies from China, but referring to the British as thieves or villains is indeed overly simplistic in this case.

No, the British navy did not invade China in 1840 because they wanted to stop opium smoking. That teacher in Hong Kong certainly got it wrong, but she was not that far off. Surprised? Well, the first people in China to call for a ban on opium smoking were not the Chinese people themselves but the Christian missionaries. Yes, they were British.

Let’s go back a little. Although Emperor Qianlong adopted an arrogant and unyielding attitude towards Westerners, he died 1799. During the early 1800s, Canton finally opened up and became the only port which was allowed to trade with Europe. A relatively small trading district was established and Western traders were only allowed to stay there during the trading season (sail-powered ships from Europe only arrived at certain times of the year). At other times, British traders had to reside in the Portuguese colony of Macao.

The trading district in Canton was easily the most prosperous in Canton if not in China. Factory buildings housed offices, living quarters and warehouses, all managed by local businessmen, providing jobs for hundreds of thousands of Chinese workers. Contrary to popular belief, the flourishing trade in Canton enriched many Chinese people. Chinese merchant 伍秉鉴 Wu Bingjian became a leading merchant in Canton even though he was from Quanzhou, Fujian. Operating under the name of Houqua “浩官”（pronounced haoguan in Mandarin) Wu is believed to be the richest man in China and possibly even the world at that time.

In Canton, foreign traders brought in textiles, cotton, furs – all of which were not in really great demand in China. In return, the British got tea and silk which were in very high demand in Europe and America. To fill this gap, British traders had to buy tea and silk with silver. Back then, China was the largest silver importer in the world. But as the demand for tea kept growing, the British began to run out of silver. They had to come up with another commodity, something that the Chinese couldn’t resist – opium.

While it was illegal to trade in opium in China, enforcement was virtually non-existent. As tons of opium were unloaded in Canton, wealthy Manchu officials quickly snapped it up. With ample supplies, the habit soon reached the masses. It became a favourite recreational drug. For decades before and up to a century after the Opium War, opium smoking was well tolerated in China. The legendary Ip Man was an opium smoker. 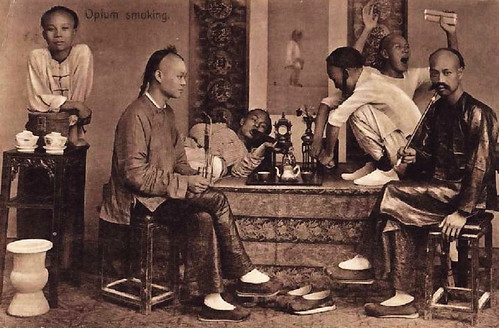 The demand for opium soon equalled the demand for tea. The trade deficit was closed in 1828. From then on, it was the Chinese who started paying for opium with silver. Things hit a snag circa 1839 when the country ran out of silver. Why was it such a concern for the Chinese government? That’s because there were two currencies in use in China back then – copper coins 铜钱 and silver taels 银两. As silver got depleted, you would need more copper coins to exchange for a silver tael. Most citizens used only copper coins in daily transactions, but land taxes had to be paid to the government in silver taels. Many landlords had to cough out a lot more copper coins to pay for their land taxes. This had immense sociopolitical implications at a time when the White Lotus Sect was causing civil unrest.

All this while, many Christian missionaries had been fighting for the ban on opium smoking without success (even though some saw opium ships as excellent vehicles for smuggling bibles). The preachers faced strong opposition from Chinese society, with many arguing that smoking opium was a Chinese tradition that foreigners had no right to question or criticise. In the end, it was not moral consciousness that made the Chinese act against opium trade. It was economic and political necessity that finally drove the government crackdown.

Today, the honour for fighting the opium trade goes to 林则徐. And for good reason. Lin was a no-nonsense bureaucrat who was ruthlessly efficient. In 1839, Emperor Daoguang 道光皇帝 （爱新觉罗绵宁）commissioned Lin to wage a war against opium. Lin took his task seriously. Perhaps a little too seriously. Opium merchants received a letter from him.

“We find that your country is sixty or seventy thousand li from China. The purpose of your ships in coming to China is to realize a large profit. Since this profit is realized in China and is in fact taken away from the Chinese people, how can foreigners return injury for the benefit they have received by sending this poison to harm their benefactors?

They may not intend to harm others on purpose, but the fact remains that they are so obsessed with material gain that they have no concern whatever for the harm they can cause to others. Have they no conscience? I have heard that you strictly prohibit opium in your own country, indicating unmistakably that you know how harmful opium is. You do not wish opium to harm your own country, but you choose to bring that harm to other countries such as China. Why?

The products that originate from China are all useful items. They are good for food and other purposes and are easy to sell. Has China produced one item that is harmful to foreign countries? For instance, tea and rhubarb are so important to foreigners’ livelihood that they have to consume them every day. Were China to concern herself only with her own advantage without showing any regard for other people’s welfare, how could foreigners continue to live?

I have heard that the areas under your direct jurisdiction such as London, Scotland, and Ireland do not produce opium; it is produced instead in your Indian possessions such as Bengal, Madras, Bombay, Patna, and Malwa. In these possessions the English people not only plant opium poppies that stretch from one mountain to another but also open factories to manufacture this terrible drug.

As months accumulate and years pass by, the poison they have produced increases in its wicked intensity, and its repugnant odor reaches as high as the sky. Heaven is furious with anger, and all the gods are moaning with pain! It is hereby suggested that you destroy and plow under all of these opium plants and grow food crops instead, while issuing an order to punish severely anyone who dares to plant opium poppies again.

A murderer of one person is subject to the death sentence; just imagine how many people opium has killed! This is the rationale behind the new law which says that any foreigner who brings opium to China will be sentenced to death by hanging or beheading. Our purpose is to eliminate this poison once and for all and to the benefit of all mankind.“

Being a patient of Dr Peter Parker (Lin suffered from hernia), the letter reproduced above, was almost certainly written by the American. Instead of hitting the opium dens, Lin decided to go for the jugular. He arrested all Chinese opium dealers in Canton. He confiscated opium stocks from European merchants and dumped them into the sea.

Meanwhile in London, the war drums were sounded. Parliament debated on the pros and cons of invading China. Some warn of the dangers. Others suggested a treaty. The decision was not unanimous, but in June 1840, the British navy sailed into Canton. It was an uneven battle. The British pummeled the Chinese and emerged victorious, killing about 3,000 Chinese people in the process. The Treaty of Nanking was pushed before the Chinese. More ports had to be opened up and trade restrictions had to be lifted. The British not only seized Hong Kong, they even demanded for compensation for their losses in the war. China was thoroughly humiliated but its richest man “Houquan” footed the bill.

Today, the British are often portrayed as villains in this conflict. Lin Zexu who suffered from the dirty trick No. 11 of 李代桃僵 (if you’ve read my book) is regarded a hero. Statues and memorials of this courageous and principled man can be found all over China, Taiwan and even Chinatowns in America. Chinese society today also takes a very dim view of opium. Nobody will say that it’s a tradition that foreigners have no right to criticise anymore.

But by now, you shouldn’t be surprised that in the aftermath of the Opium War, Lin Zexu was made a scapegoat. All fingers (in China) pointed at him as his immoderate actions on the foreign drug dealers were blamed for starting the war. Emperor Daoguang had Lin dismissed and even exiled him to Xinjiang. Lin’s career was destroyed by his own people. While the Opium War killed about 3,000 Chinese people, civil unrest before and after the war started by various cults and gangs directly or indirectly caused the death of millions of Chinese people.

It makes us wonder whether those who criticised the Hong Kong teacher for 认贼作父 understand who the real 贼 are.